Evolving a Greek Style of Football

January 15th, 2017Be the first to comment!FM17, TacticsTags: 4411, Greece, Tactics
Strong physical and mental attributes are the hallmarks of a typical Greek footballer. With strength, aerial prowess and an abundance of resolve and desire, the Greek are built to work hard and defend as a unit. But what tactics can best channel those characteristics and unify a squad predominantly made up of Greek nationals? I attempt to answer that question as manager of Aris in my God of War series. When I think about defensive solidity and structure my first thoughts are often towards a back four and a packed midfield. I get a strong feeling of confidence and safety from a row of four defenders that I don’t get with a back three or the use of wing-backs. I think it’s because of the obvious simplicity with their assigned roles and positions on the pitch. With a slower, less mobile defence it makes sense to play a slightly deeper defensive line to avoid being embarrassed by the pacier strikers. By sitting back, a strong, tall defender can do what he does best – block shots and win those aerial challenges. These traits are reminiscent of legendary defenders Sotirios Kyrgiakos and Traianos Dellas.

It’s important that we play with some width because most of our domestic opponents operate with a target man. A narrow shape would subject us to a lot of crosses and I don’t want to encourage that. Pace won’t be a typical attribute in our defence so it’s also important that we don’t stretch ourselves so wide that we’re caught out by midfield runners. Playing fairly wide will push our full backs onto their wingers without spreading the defence too thin, but it’ll also give us the attacking width needed to create crossing opportunities of our own. 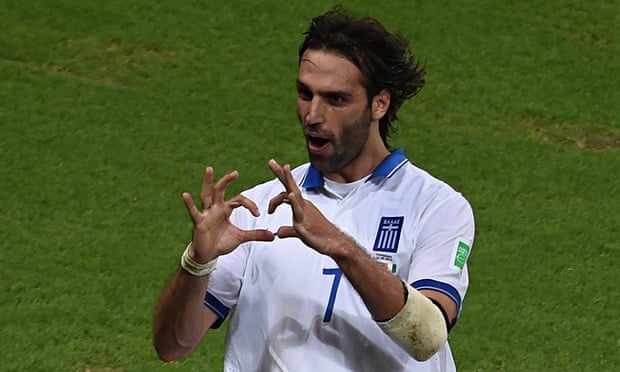 We’re not interested in playing a possession orientated game or working the ball into the box – styles favoured by small, technical outfits like Arsenal and Barcelona. Width will be a key aspect to our game if we can get the balance right. We’ll be looking to play a more disciplined game by soaking up pressure, before clearing the ball to the flanks and encouraging our wide men to hit early crosses.

This is an area I’ve often neglected in FM, but with so much height and heading ability in the squad set pieces are going to be a genuine threat that we can utilise in our tactics. Headed goal from crosses have been a staple feature of the national team over the last decade or two, and is something we can encourage and take advantage of.

We used a 4-4-1-1 formation to good effect in the first season. Player roles do slightly veer away from some of my tactical aims set out above and that’s solely down to the form of Mason Bennett. My aim had always been to use a target man and encourage the wingers to cross as often as possible. A goal glutted start from Bennett forced me to adapt my tactics to use a poacher and change my winger’s mentality from support, which would have encourage more crosses, to attack, which encouraged them to run with the ball more often. These two alterations saw us regularly put the slower Greek defences on the back foot; they found it difficult to cope with our sheer pace and attacking runs.

The Greek 4-4-1-1 formation and team instructions

This forced change in our play got me thinking about a modified formation for the following season, one that could re-introduce a target man but maintain the speed that caused havoc in many Division B fixtures. By using a target man we’ll be able to play Samaras up top in the way I’d originally planned to use him, whilst still being able to utilise Bennett’s raw pace to good effect in a wider position. After a successfull transfer window I put together a 4-3-3 formation, which I felt could pair a mutually beneficial comination of pace and height in attack, whilst maintaining a solid base with a back four and three central midfielders. Our return to the Greek Superleague sees our formation change but our team instructions remain untouched.

The Greek 4-3-3 formation and team instructions

What do you think of the new formation? Would you do things differently? Let us know your thoughts in the comments below.