Taking on the Championship

The Cottage Life series is well underway as we reach the finale of our first season in the English Championship. It’s been a mixed bag with plenty of ups and downs.

First Half of the Season

Things didn’t get off to the best of starts. My decision to strip the captaincy from Tom Cairney and the vice captaincy from Kevin McDonald inadvertently caused some discontent, mainly from the aforementioned players. I made the decision to hand the captaincy to Fede, one of my new signings. He’s got all of the attributes I want from a captain: aggression, teamwork, leadership, work rate, and long term I’m confident he’ll justify the decision. In hindsight, it might have been better to ease the 20 year into the squad first though, allowing him time to establish his place in our core social group without rocking the boat. I’ve had to tip toe around the squad since then to avoid further confrontations whilst things settle down. Regardless, results were very good to begin with.

Out of favor Kevin McDonald hasn’t been able to secure a move away from Fulham yet, despite serious interest from Rangers

Our season started with a flurry; four league wins and two cup wins gave us the perfect start from our opening six fixtures. It was an eventful opening day of the season with a 4-1 win over Norwich at Craven Cottage. Debut goals for Mayoral and Ojo, both netting a brace a piece, secured a very comfortable victory. Disaster struck in the goalkeeping department however, as Button fractured his wrist in the opening fixture, joining Marcus Bettinelli in the treatment room. We were left without a senior goalkeeper for the following five fixtures. Up stepped 16 year old Luca Ashby-Hammond. He did okay for us (average rating:6.80) and garnered some valuable first team action. He’s one for us to keep an eye on.

Our second fixture was in the Carabao Cup first round against Cambridge. Two 16 year olds (Matt O’Riley and Luca Ashby-Hammond) and one 17 year old (Steven Sessegnon) made their debuts as well as new strikers Aboubakar Kamara and Rui Fonte, who got themselves off the mark with a goal a piece. We hosted Newport from League Two in the next round before going out on penalties to Swansea in the 3rd.

Youngster, Matt O’Riley, has been getting plenty of first team action this season

Borja Mayoral had a prolific start for us with 13 goals from 14 starts. It was no coincidence that his injury coincided with a poor run of form during September. Midfield orchestrator, Tom Cairney, was next on the injury list. A damaged cruciate ligament put him out of action for 8-11 months. Matt O’Riley has had plenty of first team opportunities as a result. Due to the sheer volume of injuries to key players I had to call a team meeting to try and rouse the players. I got a positive reaction and results picked up. We spent most of the first half of the season in the playoff spots, mostly between 2nd and 4th. Since the captaincy change managerial support from several players had significantly lowered and the board had taken note. A continued poor run could have seen my contract terminated.

Results were decent in the lead up to Christmas, which gave us chance to regroup and do some business in January to aid our push for promotion. The small bit of business we did helped to boost the squad size, which was much needed due to the volume of injuries. Results in January were excellent with 10 points from a possible 12 and an FA Cup win over Burnley. We eventually went out to Newcastle in the 4th round. Our good run of form put us in second place and only a couple of points behind the leaders, Brentford.

Our marque signing in January was Ager Aketxe who joined us from Bilbao for a bargain £450K. The attacking midfielder is in the mould of Juan Mata and he made an immediate impact. He delivered an assist and this stunning free kick on his debut, in a 3-1 win over Ipswich:

Our only other noteworthy transfers were loan deals for Luke Garbutt and Dominic Solanke – just to give the squad a boost. We had every reason to be excited about our new intake of youth players too, which included a promising young striker called Robert Groves. Groves is now the youngest player to appear in the first team at 16 years and 42 days.

Business End of the Season 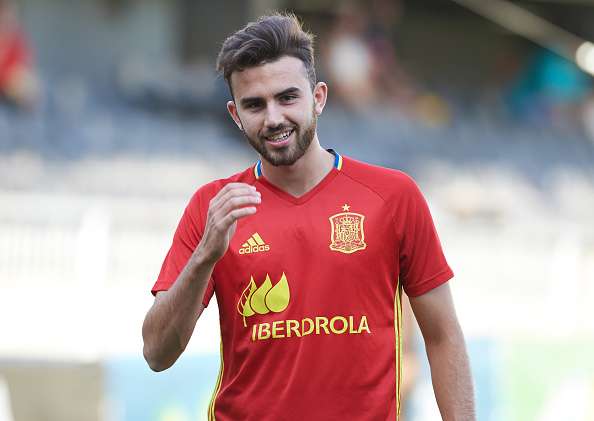 A massive 1-0 victory was secured over Wolves at Craven Cottage in a 2nd vs 3rd place clash. With only four points sperating us prior to kick off it was huge result. Happy to avoid defeat, I decided to frustrate Wolves with our 4-5-1 counter attacking tactic. We kept them quiet all game and a 91st minute penalty from Moyoral ensured pandemonium in the stands (and the sofa of my living room).

Since the January transfer window slammed shut we’ve had major interest in Ryan Sessegnon from Man City, and minor interest from Everton. I doubt a £16M buyout clause will put either club off, that possibly gives us until the end of the season before someone takes advantage. That alone gives even more importance to this season’s push for promotion, with what may be our only chance of keeping him at Craven Cottage.

With just nine games remaining we reached the top spot for the first time all season. Two games later we secured a playoff place and had automatic promotion in our hands. With just four games remaining we reached the big one – Fulham vs Brentford, 1st vs 2nd. Victory over our fierce local rivals would either seal automatic promotion to the Premier League, or see us wither at the final hurdle. For what was the biggest games of our season it did not disappoint. Brentford took an early lead and maintained it up until the 75th minute. In desperation I switched to an all out attack with a 4-2-4 formation, and threw 16 year old Robert Groves upfront alongside Mayoral. The unthinkable happened – Groves bagged two goals in quick succession before winning a penalty, which Mayoral converted. Groves was the hero in a magnificent 3-1 comeback.

We continued our good form into the remaining fixtures and sealed the Championship title with a game to spare. Local rivals Brentford ended up in second place and will join us in the Premier League, keeping one of our targets alive for next season – “embarrass a rival”. Aston Villa were the final team to gain promotion via the playoffs.

Fulham are back in the Premier League!

Having successfully swerved interest in Ryan Sessegnon until the end of the season, which triggered an automatic three year extension due to our promotion, I was hit with some heartbreaking news as we approached the pre season of our premiership return. Billionaire owner, Shahid Khan, went over my head to accept a £38.5M offer from West Ham – we’ve lost our star man. £23.5M of that income has been added to the transfer budget but he’s irreplaceable. I expect him to go on and make his full international debut before long, which will only rub salt in to the wound. Our academy prospect with the most potential for an England call up now is current under 19 international, Matt O’Reilly.

Rather than splash out on an expensive replacement I decided to strengthen the squad in multiple areas by taking advantage of several bargain deals on the market:

I think it's important to set out some targets for any new save on Football Manager, to give you something to aim for and give the series a purpose. I find it more enjoyable that way! These targets will be visible on all posts within the series and will be updated as we go along. The aim of course is to tick off as many of these as possible.