April 1st, 2018Be the first to comment!Diaries, FM18Tags: Borja Mayoral, Bundesliga, Dynamo, Fiete Arp, Germany
Season four saw us continue our progression in domestic competitions, with European football secured for a second year running and a surprise piece of silverware added to the collection.

As holders of the German Cup we featured in German football’s curtain raiser; the German Supercup. A hard earned 1-0 win over Bundesliga champions, Dortmund, got our season off to a fantastic start. New signing, Matías Vargas, had a debut to remember by netting the winner in a man of the match performance.

In the league, we secured Europa League qualification for the second season running with a 5th place finish. A 5-0 trouncing of Wolfsburg on the final day of the season ensured that we ended on a high. A record points tally of 58 (52 the previous season) shows really good progress for a club on the rise.

There was only disappointment for us in the German Cup as Dortmund exacted revenge with a sobering 3-0 win, ejecting us from the competition in the 3rd round.

We got as far as the 2nd round in the Europa League where AZ of Holland edged us out on away goals. A disappointing blow but we are fairly new to the competition.

We were hit hard in January as AC Milan triggered star striker Borja Mayoral’s £16M buyout clause. Fortunately Fiete Arp stepped up to the plate, though we were perhaps over reliant on him for the second half of the season, having failed to find a suitable replacement before the window closed.

Alberto Brignoli came in as our 2nd choice goalkeeper (free). We added some young talent at right back with the acquisition of Borja Sam Emeterio (£275K), brother to our ball winning midfielder, Fede.

The big marque signing was a January swoop for Santiago Ascacibar, he makes his return to German football. It was a big outlay at £15M and a whopping £70K a week wages, but the now Argentine international clearly has star quality and his value has almost doubled already. Already fluent in German, he slotted into our midfield perfectly and put in some decent performances.

A couple of domestic players joined the club in the shape of Marc Stendera (£5.25M) and Jonas Hofmann (£2.4M). Hofmann made a decent contribution down the right flank but I was a little disappointing by Sendera’s form, with some quality attributes at set pieces I thought he contribute a lot more assists.

Since losing Phil Foden I’ve been on the look for a young flamboyant attacking midfielder. Someone who could be a game changer with that little bit of extra quality in the final third. Signed from PSG for a bargain £2.3M, Matias Vargas looks to be that man. Contributing 7 goals and 15 assists, he’s been outstanding for us in all competitions.

Our big news is that we’ve now completed the purchase of our stadium, Stadion Dresden, which we were previously renting. It’s still a relatively new stadium, having been rebuilt in 2009. It boasts undersoil heating and has room for 32,066 fans, with the potential to extend that up to 45,700.

We received £56.37M for our final league position and given an initial transfer budget of £35.6M for the coming season. 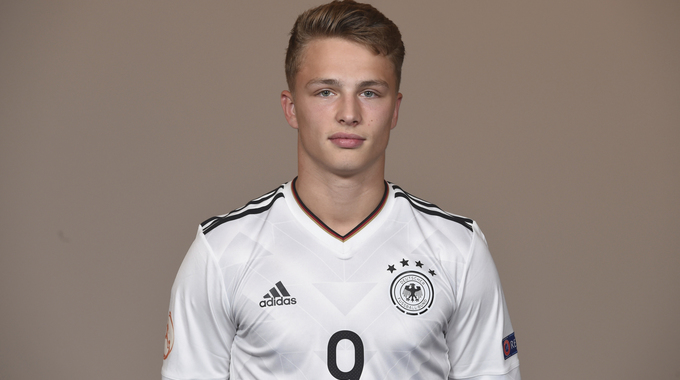 New signing, Fiete Arp, was the pick of the bunch this season. Our new striker had a wonderful debut season, netting 29 goals in 30 starts. He was the 2nd highest goalscorer in Europe, 2nd only to Munir at RBL.

His prolific season softened the blow of losing last season’s top striker, Borja Mayoral. As disappointing as I was to lose Mayoral I am happy to have a good core of domestic players in the squad with Arp leading the line. Arp cleared up at the end of season awards and justly so. It was another very impressive season our midfield dynamo, Dzenis Burnic, who earned a place in the Bundesliga Team of the Year.