A Stronger Scotland Part 3 – the Chase

April 30th, 2016Be the first to comment!Diaries, FM16Tags: Hibernian, Jason Cummings, Scottish
As the end of the season draws close the race for the Scottish Championship title is on. Like two galloping beasts, rivals Hibernian and Rangers are gallantly racing towards the finish line. But who will be the victor, and will they both progress? 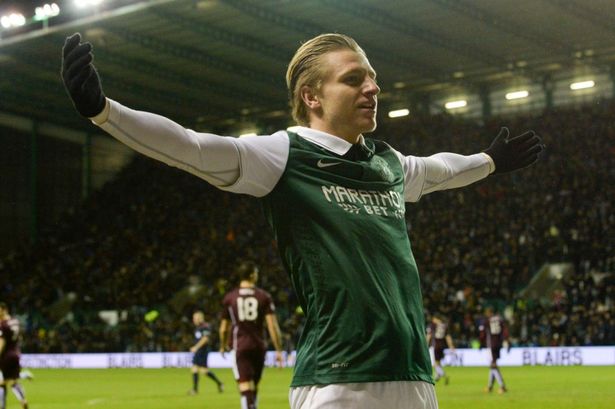 Cometh the hour, cometh Jason Cummings. This post is a general update on our progression but Cummings deserves a special mention. Without doubt he has been the catalyst of our teams success as our first season edges towards an enthralling climax. I knew he’d be an important piece in the jigsaw but his form has been nothing short of scintillating magic. He’s scored a whopping 25 goals in 28 games and unsurprisingly sits at the top of the league goalscoring chart.

The bad news is he’s been struck by injury, out for 6-8 weeks with shin splints. No expense was spared for our top marksman as he was sent for specialist treatment. Seems to me that when your team are playing with what feels like an unbreakable synergy, systematically performing week in week out with a total football intensity, FM puts a spanner in the works. I guess that’s just football, but we’ve had to find a solution – more game time for on-loan Alex Kiwomya in a less familiar striker role has worked well, his pace makes him a constant threat. An added option in the form of Vahid Hambo, a target man on loan from Brighton adds some backup to the strike force. I’m confident we’ll cope.

An added bonus (and pretty big news for us) is that I’ve managed to extend Jason Cummings contract with the club for a further 2 years with an optional 3 years, which is likely to be triggered. Our talisman is here to stay and we can look forward to seeing more of this:

My hopes that both ourselves and Rangers will gain promotion is still very much a possibility as we currently occupy the top two spots. The lottery of the playoffs for the runner up isn’t something we can influence if we manage to keep our nerve and secure the title, but I’d fancy Rangers’ chances in that situation. As the series title suggests I want to make Scottish football stronger, and I feel that we need Rangers in the Premiership with us for that to have a chance. After 25 games of the season the master plan can still be realised:

As I pointed out at the start of the series we’ve had practically no funding but I still need to find ways to strengthen the side. I was delighted to confirm the loan signing of Ryan Gauld, one of the top young prospects to come out of Scotland in recent years. I’m hoping that his spell with us will help create an affection for the club that sees a permanent deal come to fruition. The same can be said for other on-loan talents like Fosu-Mensah (Man Utd), Sheyi Ojo (Liverpool) and Alex Kiwomya (Ipswich). If I can make these deals permanent at the end of the season, or even extend their loan stay, that would be a massive lift going in to the next season.

If all goes well and promotion is achieved we should get some added funding that I can either spend on young talent, or use to take the club facilities to the next attainable level.

It’s all about the long term plan.